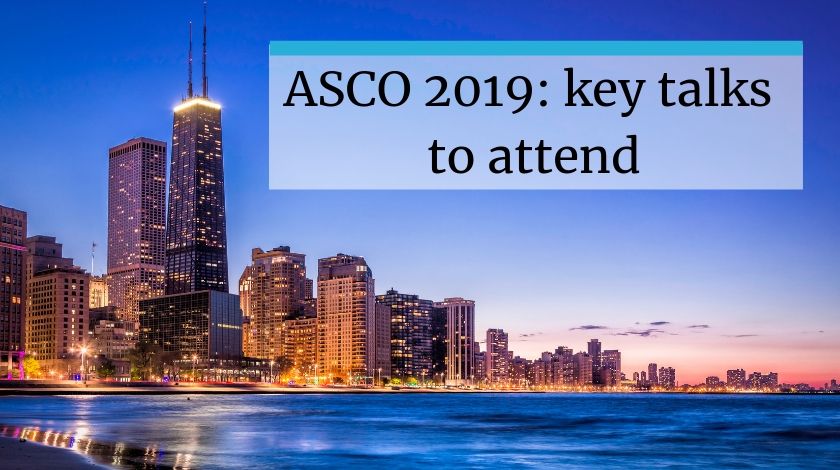 All eyes are on Chicago as the Annual Meeting of the American Society of Clinical Oncology (ASCO; May 31– June 4, 2019, IL, USA) fast approaches. With over 40,000 attendees and 5000 abstracts accepted, it can be a tricky to know which talks to listen out for! To help you make the most of the largest conference in oncology, we have selected key talks for you to attend.

One trial that has created a lot of excitement pre-ASCO is the Phase III SOPHIA trial (abstract #1000), which has unearthed positive progression-free survival (PFS) results in patients with HER2-positive metastatic breast cancer treated with margetuximab.

At the time of the primary PFS analysis, overall survival (OS) data based on 158 events was immature. However, we do know that the median OS was prolonged by 1.7 months in patients treated with margetuximab and chemotherapy compared to patients treated with trastuzumab and chemotherapy. Meanwhile in the exploratory subpopulation of patients, carrying the CD16A 158F allele, the median OS was prolonged by 6.8 months in the margetuximab arm compared to the trastuzumab arm. The eagerly awaited final OS results will be presented on the last day of ASCO Tuesday June 4th at 9.45am (all times CDT) in Hall D1.

Another study to look out for in the field of breast cancer is one that was highlighted at the pre-ASCO press briefing. Results from a 20-year clinical trial reported that following a diet that was low in fat and high in fruits, vegetables and grains could lead to a 21% lower risk of death from breast cancer when compared to a regular diet in post-menopausal women. Find out further details here in our news coverage and hear from the author in the poster discussion session that will be taking place from 4:30pm in Hall D2 on Sunday June 2nd.

In the field of gynecologic malignancies, there has been a rush of excitement following the release of initial positive data for cervival cancer from Iovance Therapeutics (CA, USA), which is investigating a tumor infiltrating lymphocytes (TIL) therapy termed LN-145. In preliminary efficacy results, LN-145 yielded a 44% overall-response rate (ORR) in 27 pre-treated, recurrent cervical cancer patients. Compare this to pembrolizumab, which produced an ORR of 14% for the same indication, and we get a real idea of the anticipation behind this. Find out more about LN-145 on Saturday 1st June in the poster session that will run from 8.00am in Hall A.

Two abstracts in this field were highlighted during the ASCO pre-press cast, both focusing on the genetic aspects of pediatric cancers. The first, demonstrated promising results for entrectinib in pediatric populations with rare central nervous system tumors, neuroblastoma, or other solid tumors, which have fusions or mutations in the NTRK1/2/3, ROS1, or ALK genes.

“Our results show that children with life-threatening cancers can benefit greatly even after other conventional therapies have not worked… These early findings suggest that this therapy holds great promise for those whose tumors have these specific gene fusions,” commented author Giles Robinson (St. Jude Children’s Research Hospital, TN, US). You can read the full news story here and find out more in the oral abstract session on the Sunday June 2nd, which will kick off at 8:00am in room S504.

The second study in the media briefing showcased data from the nationwide NCI-COG Pediatric MATCH trial, which has unearthed that targetable genetic alterations in pediatric cancers may be much more frequent than initially predicted.

At the launch of the NCI-COG Pediatric MATCH trial, it was estimated that the trial would identify genetic alterations that matched an investigational targeted therapy in 10% of study participants. However, at interim analysis, the match rate was significantly higher – with 24% of participants eligible to receive treatment with at least one drug being tested in the trial.

Will Parsons, COG study chair, from the Baylor College of Medicine (TX, USA) commented on the significance of the findings: “Our study shows that we can successfully create a nationwide molecular screening trial for children, adolescents, and young adults with cancers that have been resistant to treatment.” This abstract will also be featured in the oral abstract session mentioned above in S504.

One of the most highly anticipated presentations for investors will be the results from the Phase I clinical trial of AMG 150 – the first ever KRASG12C blocker to reach the clinical stage. The abstract outlines that describes 22 adult patients with locally-advanced or metastatic KRASG12C mutant solid tumors, tumour response was measured in nine patients.

In this cohort, one patient had a partial response, while six had stable disease and two had progressive disease. A second partial response was reported after data cut off. Hear more 9:00am on Monday 3rd June.

The Oncology Central team will be in Chicago reporting all live news from ASCO as it breaks, so make sure to follow us on Twitter @OncologyCentral and keep checking back to our news page.

ASCO19: multiple myeloma – what socio-economic factors contribute to a higher probability of survival?