Future Oncology recently published the Global Longitudinal Assessment of Treatment Outcomes in Recurrent/Metastatic Nasopharyngeal Carcinoma (GLANCE-NPC) chart review study designed to investigate real-world treatment patterns and overall survival outcomes among patients with recurrent and/or metastatic nasopharyngeal carcinoma (R/M NPC) in Taiwan and South Korea. This retrospective observational study was conducted at 12 sites in Taiwan and South Korea with a total of 154 patients enrolled in the study, including 104 patients from eight sites in Taiwan and 50 patients from four sites in South Korea. The authors found that differences in the location of metastases led to variation in treatment approaches across Taiwan and South Korea. Patients with distant metastatic disease in both countries mainly received systemic therapy only, whereas patients with metastases only in distant lymph nodes (DLN) in South Korea primarily received systemic therapy and radiation. Survival in patients with R/M NPC with distant metastases was poor, underscoring the need for more efficacious treatments.

Aim: Given a lack of standard of care treatment for R/M NPC, we assessed treatment patterns and overall survival in the real-world setting.

Patients & Methods: A retrospective chart review was conducted in patients who initiated first-line systemic therapy in Taiwan and South Korea between January 2012–June 2013 with follow-up through December 2015.

Nasopharyngeal carcinoma is an invasive cancer affecting the area behind the nose and above the back of throat. When this cancer returns or spreads to another part of the body, patients receive chemotherapy options with the goal of prolonging survival. To understand chemotherapy approaches used in everyday practice and their effectiveness, we conducted a review of medical records in Taiwan and South Korea. We studied 154 patients who started a first chemotherapy between January 2012–June 2013 and followed patients through December 2015. Patients whose cancer spread in another part of their body generally received chemotherapy without radiation and lived 23 months on average. Our findings show that more effective treatments must be developed to help prolong survival. 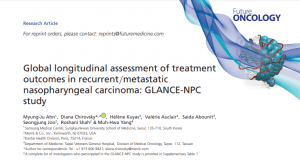 Register to Oncology Central now for the latest journal content

The safety and efficacy of lenvatinib in advanced thyroid cancer patients: a Phase II trial

What more do we want from neoadjuvant treatment strategies in rectal cancer?