Recently, Future Oncology published a pooled analysis including three cisplatin registration trials, each with arms containing NEPA, a fixed NK1RA (netupitant)/5-HT3RA (palonosetron) combination, and an aprepitant regimen. The efficacy data from 621 NEPA and 576 aprepitant patients was pooled for rates of complete response, complete protection, total control and no significant nausea (NSN) during acute (0–24h), delayed (>24–120h) and overall (0–120h) phases post-chemotherapy. The authors found that response rates were similar for the acute phase and significantly higher for NEPA during the delayed phase for complete response, complete protection, and NSN and also during the overall phase for NSN.  Consistent with these findings, NEPA patients also experienced significantly less breakthrough CINV on Days 3-5 post-chemotherapy. In the subset of patients receiving the highest doses of cisplatin, these differences were amplified. The current antiemetic guidelines consider all NK1 receptor antagonists (RA) as interchangeable. This is due to the lack of controlled comparative clinical trials; however, the outcome differences shown in this pooled analysis may question this assumption. Results from this analysis have shown that a single dose of oral NEPA administered on Day 1 only, was more effective than a 3-day aprepitant regimen in preventing delayed chemotherapy-induced nausea and vomiting associated with cisplatin-based highly emetogenic chemotherapy.

Aims: In the absence of comparative studies, guidelines consider NK1 RA as interchangeable. We evaluated the pooled efficacy from 3 cisplatin registration trials, each with arms containing NEPA, a fixed NK1RA (netupitant)/5-HT3RA (palonosetron) combination, and an aprepitant regimen.

Results: Among 621 NEPA and 576 aprepitant patients, response rates were similar for the acute phase, and generally favored NEPA during delayed and overall phases. Complete response rates for NEPA versus aprepitant were 88.4% versus 89.2%, 81.8% versus 76.9% (p < 0.05), and 78.4% versus 75.0% during the acute, delayed and overall phases, respectively.

Conclusions: Oral NEPA administered on Day 1 was more effective than a 3-day aprepitant regimen in preventing delayed nausea and vomiting associated with cisplatin.

Oral NEPA is an innovative product that combines two drugs (netupitant and palonosetron) in a single capsule to prevent nausea and vomiting associated with certain types of chemotherapy. In this paper we pooled together the results of three studies comparing the efficacy of NEPA to two drugs from the same classes administered separately (aprepitant regimen) in patients with various solid tumors receiving cisplatin, a type of chemotherapy with a high likelihood of causing nausea and vomiting. In summary, NEPA was more effective than the aprepitant regimen in preventing nausea and vomiting in the later days (Days 3–5) following chemotherapy. 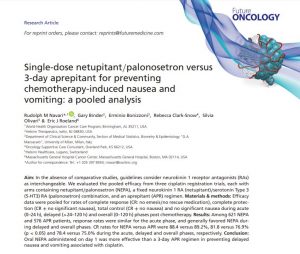 What more do we want from neoadjuvant treatment strategies in rectal cancer?