At the ESMO 2018 Congress (19–23 October 2018, Munich, Germany) we had the pleasure of speaking with first author Barbara Burtness (Yale School of Medicine, CT, USA) about the trial and what further advances she envisages with respect to head and neck cancer, as well as immuno-oncology, in the coming years.

KEYNOTE-048 was a 3-arm Phase III trial for patients with recurrent or metastatic head and neck squamous cell carcinoma not amenable to curative resection or radiation. Patients were randomly assigned to pembrolizumab alone, a novel combination of pembrolizumab with a platinating agent and 5-fluorouracil, or the standard of care EXTREME regimen consisting of cis- or carboplatin, 5-fluorouracil and cetuximab. Patients were stratified by high tumor expression of PD-L1, p16 status and performance status. The primary endpoint was overall survival and analyses were conducted in the total population and in those with elevated PD-L1 expression in the tumor and stromal cells (CPS). For pembrolizumab monotherapy, overall survival was superior for pembrolizumab compared with the EXTREME regimen for patients with a CPS score of >20 or > For CPS 20, overall survival was 14.9 months for pembrolizumab compared with 10.7 months for the EXTREME regimen (hazard ratio 0.61, p= 0.0007).

The effect was durable, with 2-year survival 38.3% for pembrolizumab treated patients and 22.1% for EXTREME treated patients. For CPS1 patients, overall survival was 12.3 months for pembrolizumab and 10.3 months for EXTREME (hazard ratio 0.78, p= 0.0086; 2-year survival 30.2% vs. 18.6%). For each cohort, there was no variable (age, sex, performance status, region of enrolment, smoking status, p16 status and recurrent vs. metastatic disease) which predicted superiority of EXTREME over pembrolizumab.

2. How do you hope this trial might affect the clinical practice on the frontline of care?

I anticipate that pembrolizumab will be incorporated into the first line of treatment for recurrent or metastatic head and neck cancer for the majority of patients. The decision about when to use pembrolizumab alone and when to use a combination of pembrolizumab with chemotherapy may depend on both the level of PDL1 expression in an individual’s tumor, as well as clinical characteristics, and I expect that as the data mature and further correlative studies are completed, this will come into sharper focus.

3. What further advances do you hope to see with respect to head and neck cancer, as well as immuno-oncology, in the coming years?

The KEYNOTE-048 trial represents an important step forward for patients with recurrent or metastatic head and neck cancer, and indicates that early exposure to pembrolizumab has an important survival benefit. The question is how to build on this for patients in the curative setting. Current trials explore incorporating PD-1 and PD-L1 inhibitors in the pre-operative and definitive radiation and chemoradiation settings.

4. How can we best select patients who can use immunotherapy even earlier during their treatment plan?

At the moment, the best biomarker appears to be high level PD-L1 expression, but elevated tumor mutational burden and interferon response gene signature are also promising in head and neck cancer. It seems likely to me that essentially all patients with high risk disease will be exposed to immunotherapy and biomarkers will be used to distinguish between patients who are highly responsive to PD-1 inhibition alone, and those who will require a combination of immunotherapy with cytotoxic therapy or other immune activating agents.

5. What are your big plans for the next few years? / What further investigations do you have planned? 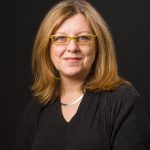 Profile: Barbara Burtness,  is Professor of Medicine (Medical Oncology) at the Yale University School of Medicine and Yale Cancer Center. She serves as Co-Leader of the Developmental Therapeutics Program and the Disease Aligned Research Team Leader for Head and Neck Cancer. Burtness is internationally recognized for her research in head and neck cancer. She chairs the Eastern Cooperative Oncology Group Head and Neck Cancer Committee, and leads national and international trials of targeted therapy in head and neck cancer.

Towards predictive biomarkers for immunotherapy response in breast cancer patients

Welcome to our Spotlight on tumor mutation burden