The latest research article published in Future Oncology reports the treatment patterns, clinical outcomes and patient characteristics in aRCC patients from across the US healthcare setting.

Results: Surveyed physicians reported first-line treatment of 445 patients involving TKI monotherapy (51.0%), IO/IO combination therapy (25.8%) or other regimens (23.1%). A total of 60.9% had physician-assessed IMDC risk. Of these 61.9%, 50.9% and 27.6% of patients with favorable, intermediate and poor risk, respectively, received TKI monotherapy. A total of 16.7%, 26.9% and 34.5% of patients with favorable, intermediate or poor risk received IO/IO combination therapy. Complete/partial responses (~35% patients) remained comparable across first-line treatments.

In patients with advanced/late-stage aRCC, a type of kidney cancer that has spread to other parts of the body, the chance of recovery from the disease over time is low. A number of new treatments have become available in recent years, including types of drugs like TKIs new IO/TKI and IO/IO combination therapies. We wanted to know how these drugs are used in clinical practice. We carried out a survey asking physicians various questions such as the age and gender of patients, how long they had aRCC, how they were treated and what their symptoms were. The survey showed that despite being available as treatments, these new drugs were not routinely used as recommended by recently published clinical guidelines. Patients, whose chances of recovering from aRCC were low, were more likely to be given TKIs instead of the new IO/TKI and IO/IO combinations now recommended (resulting in a less than 10% chance that the disease would totally disappear). As healthcare practitioners learn more about these new treatments, it is expected that their use will increase, leading to improved outcomes. 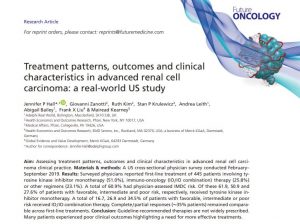 Register to Oncology Central now for the latest journal content

At the crossroads: the intersection of the gut microbiome and immuno-oncology

How can we predict response to immune checkpoint inhibitors in mice?

Keytruda® gets the green light from NICE for untreated lung cancer

ASCO18: Antibiotic use reduces effectiveness of immunotherapy in cancer patients