In this research article, published in our partner journal Future Oncology, authors describe real-world time on treatment (rwToT) with immuno-oncology (I-O) and other systemic therapies for the second-line treatment of recurrent or metastatic head and neck squamous cell carcinoma (R/M HNSCC) previously treated with platinum-based chemotherapy.  The primary study objectives were to assess rwToT in patients initiating second-line treatment with I-O and non-I-O therapies. Additionally, the authors describe baseline patient demographics, tumor characteristics and treatment distribution in the first- and second-line treatment settings of the 619 patients included in the sample.  The results of this study revealed that rwToT tended to be longer for I-O monotherapy than with non-I-O therapy. The demographic and clinical characteristics of the patients were generally similar to those reported in observational studies and clinical trials of patients with R/M HNSCC. The use of US FDA-approved I-O therapies, nivolumab and pembrolizumab, in R/M HNSCC patients previously treated with platinum-based chemotherapy was common in US oncology practices and resulted in longer time on treatment with a greater proportion of patients continuing treatment at 1 year compared to other second-line therapies.

Background. We report rwToT with I-O and other systemic therapies in second-line R/M HNSCC previously treated with platinum therapies.

Conclusions. Use of second-line I-O therapies was common and resulted in rwToT consistent with R/M HNSCC clinical trials.

Head and neck cancer includes tumors that develops in the mouth, throat, nose, salivary glands, oral cancers or other areas of the head and neck. When this cancer returns or spreads to another part of the body, systemic chemotherapies are often used with the goal of prolonging survival. Immunotherapy has emerged as a new approach to treat head and neck cancer by using the body’s own immune system to kill cancer cells. The purpose of this study was to better understand use of immunotherapies in patients with head and neck cancer after the cancer has returned or spread to another part of the body. The study showed that immunotherapies were used commonly and resulted in fewer treatment discontinuations in comparison to other systemic chemotherapies. These results support use of immunotherapies in this patient population. 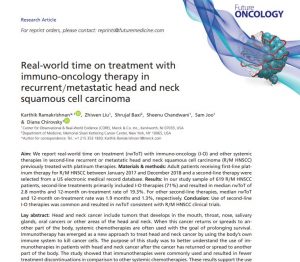 Combating immunotherapy resistance in melanoma: an interview with Jacob Zaemes and Michael Atkins