Researchers from the The Institute of Cancer Research (ICR) (London, UK) recently discovered that men with testicular germ cell tumors could benefit from a new combination of treatments if their chemotherapy stops working, we spoke with study lead Janet Shipley from the ICR to find out exclusive details of this exciting study.

Could you give us a brief overview of your research article: IGF1R signaling in testicular germ cell tumor cells impacts on cell survival and acquired cisplatin resistance?

Testicular cancers termed testicular germ cell tumors are most common in younger men and could benefit from a novel combination of treatments if their chemotherapy stops working. Receptor tyrosine kinases such as the insulin growth factor receptor-1 (IGF1R) play critical roles in important cellular processes such as cell growth and division and are implicated in driving development and progression of some types of cancer.

Importantly, blocking the protein’s activity in chemotherapy-resistant cells increased their sensitivity to platinum-based chemotherapy drugs. This means that IGF1R inhibitors could prove to be a treatment for drug-resistant testicular germ cell tumors.

What are the next steps for this research?

Some existing IGF1R inhibitors have been tested in clinical trials for other types of cancer and could be tested to re-sensitize cancers that have become resistant to the platinum-based drugs which are used to treat testicular cancer patients.

How do you hope to see treatment options for testicular cancers evolve over the next 10 years?

From a research perspective, further molecular understanding of why most testicular cancers are actually very sensitive to platinum-based drugs, with resistance arising in some cases and why other cancer types are not generally sensitive, could have important implications. Not only could this lead to other treatment options to reverse resistance in testicular cancer, but could have potential to make other cancer types sensitive to platinum-based drugs.

Research is also needed to refine the intensity of treatment given to individual patients and to identify new treatments that target the cancer cells and spare normal tissues, in order to reduce the long term side-effects that some men experience as they get older. Over the next 10 years, I expect that early detection, particularly through identifying men at higher risk and increasing awareness, will improve too. 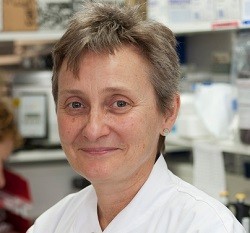 Janet Shipley – Head of the Division of Molecular Pathology, The ICR.

Originally from Newcastle upon Tyne, Janet Shipley obtained a BSc (Hons) in Biology from Southampton University and a PhD from the University of London (both UK).

She has previously worked in the DNA Repair Group at the Pediatric Research Unit at Guy’s Hospital in London, the Genetics Division of Harvard at Children’s Hospital in Boston (MA, USA) and the Imperial Cancer Research Fund UK (which became the London Research Institute and is now part of The Francis Crick Institute).

Shipley moved to The Institute of Cancer Research to establish a laboratory characterizing genetic rearrangements in tumors and was awarded tenure in 1996 and a readership in 2003. She has authored more than 160 peer-reviewed manuscripts. Her current research is focused on identifying molecular markers of high-risk in young onset sarcomas and understanding associated molecular mechanisms in order to derive novel treatments for these patients.