Within recent weeks, our colleagues at the World Cancer Research Fund (WCRF) have released the latest report from their Continuous Update Project, which analyzed worldwide research into the link between various lifestyle factors and the development of esophageal cancer.

WCRF describe this report as “the most rigorous, systematic, global analysis of the scientific research currently available on diet, weight, physical activity and esophageal cancer, and which of these factors increase or decrease the risk of developing the disease.”

Following this release, we spoke with Susannah Brown (Scientific Programme Manager – Research Evidence at WCRF) about esophageal cancer, the work the WCRF independent panel carried out for this CUP report and what the main findings were.

OC: For those of our audience who are not aware, please could you give us a quick introduction to WCRF and the work you have been carrying out in the Continuous Update Project?

The Continuous Update Project is our ongoing programme to analyze global research on how diet, nutrition, physical activity and weight affect cancer risk and survival. Among experts worldwide it is a trusted, authoritative scientific resource, which underpins current guidelines and policy for cancer prevention.

The findings from the Continuous Update Project will be used to update our recommendations for cancer prevention, which are at the core of all our health promotion and policy activities, ensuring that everyone – from policy makers to members of the public – has access to the most up-to-date information on how to minimize the risk of developing cancer.

OC: You have just released your latest CUP report, looking into how diet, nutrition, physical activity and weight affect risk and survival in esophageal cancer – what work was involved in the completion of this report? Who was involved?

SB: As part of the Continuous Update Project, scientific research from around the world is collated and added to a database on an ongoing basis and systematically reviewed by a team at Imperial College London (UK). For this report, 46 studies were looked at, covering 15 million adults of whom 31,000 were diagnosed with esophageal cancer. An independent panel of experts then evaluated and interpreted the evidence to make conclusions based on the body of scientific evidence. Their conclusions will form the basis for reviewing our Cancer Prevention Recommendations in 2017.

OC: What were the main findings of the report?

The main findings of this report included the following:

OC: Would you say that esophageal cancer is an area of significant unmet medical need?

SB: Esophageal cancer incidence rates have increased by 43% in Great Britain since the late 1970s and the disease is associated with a particularly poor survival rate – only 10% in Europe and 20% in the USA. An area that we see has been unmet is raising awareness that around 34% of esophageal cancer cases could be prevented every year through a healthy diet, being physically active and maintaining a healthy weight.

OC: As a result of this report, what recommendations would you make to the general public in terms of reducing their risk of developing this disease?

To reduce your risk of esophageal cancer we recommend following WCRF’s Cancer Prevention Recommendations, which include maintaining a healthy weight and checking your BMI and waist measurement regularly, and not to drink alcohol. If you drink alcohol– it’s better not to drink at all – but if you do decide to drink then follow your national guideline and do not smoke.

OC: Any other comments?

A review of the Cancer Prevention Recommendations is expected to be published in 2017. So far, CUP reports have been published on the latest evidence for breast, colorectal (bowel), pancreatic, endometrial (womb), ovarian, prostate, liver, gallbladder, kidney, bladder, stomach and esophageal cancers; as well as for breast cancer survivors.

You can read the full esophageal cancer CUP report here.

Want to know more about the work WCRF are carrying out? Oncology Central recently collaborated on a webinar with the WCRF team – catch up on this here to hear Susannah and colleagues discussing the links between obesity and cancer. 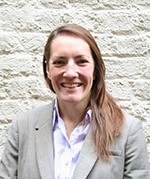 Susannah Brown is Science Programme Manager (Research Evidence) at World Cancer Research Fund International. She works on the organization’s Continuous Update Project. Prior to this, Susannah was a Deputy Project Manager at the University of Oxford, conducting research into diabetes. She has an MSc in Human Nutrition (specializing in Public Health Nutrition) from the University of Glasgow. She has represented her country at Rugby Union amassing 62 caps over eight years representing Scotland.

Hepatocellular carcinoma risk scores: ready to use in 2015?