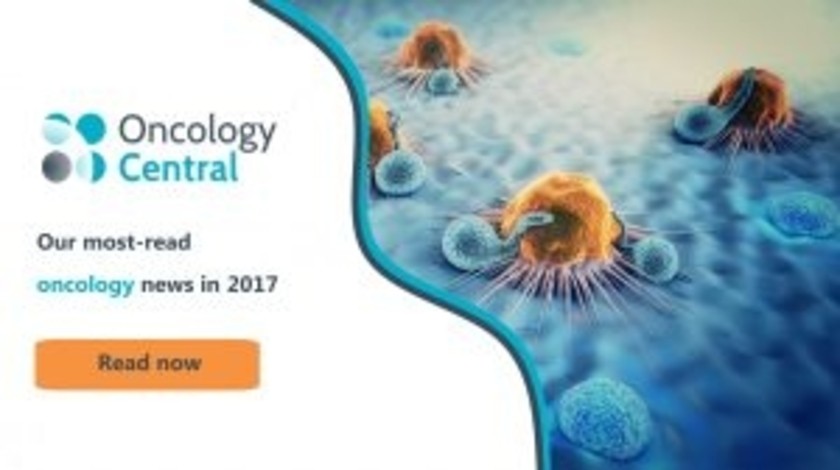 As we approach 2018, we take a look back at the biggest oncology news stories of 2017; highlights include drug approvals, genetic discoveries and immunotherapy advancements. Catch up on the 12 of the most notable news headlines of 2017 below, we hope you enjoy our selection and look forward to what 2018 has in store.

AACR17: Immunotherapy efficacy may be influenced by the patient’s immune system

Towards the start of the year, news from AACR (April 1–5; WA, USA) dominated the headlines. Of note a study presented at the meeting demonstrated that variations in the levels of particular immune cells in cancer patients may be associated with how well they respond to immunotherapy. The research was an extension of the recently completed phase III clinical trial, CheckMate 141. Checkmate 141, which was co-chaired by Robert Ferris (UPCI, US), demonstrated that the checkpoint inhibitor, nivolumab, significantly increased survival and resulted in fewer adverse events in patients with recurrent head and neck cancer.

Method of diagnosing cancer without resorting to surgery uncovered

Later that month, a team of researchers from Standford University (CA, USA) reported a novel method of diagnosing cancer without resorting to surgery. In this study, the team demonstrated that ultrasound molecular imaging with the targeted contrast microbubble is clinically feasible and safe. Previously this form of microbubbles have only been utilized to image organs such as the liver by displaying the bubbles as they pass through blood vessels. The team hope that their findings could improve diagnoses and reduce unnecessary surgeries in women suspected of having breast or ovarian cancer.

For the second consecutive year, the American Society of Clinical Oncology (ASCO) named cancer immunotherapy as their clinical cancer Advance of the Year in June. Their report – Clinical Cancer Advances 2017: ASCO’s Annual Report on Progress Against Cancer – emphasized the growing number of cancer patients benefiting from immunotherapy and highlighted how evolving research is aiding the optimization of these treatments. “In less than a decade, immunotherapy has gone from being considered a promising theoretical treatment to one that has become a standard of care that is helping extend or improve the lives of thousands of patients,” commented ASCO President Daniel F Hayes.

One of the standout studies presented at ASCO was an analysis of 6 clinical trials comprised more than 12,800 patients demonstrated that 3 months of chemotherapy is almost as effective as 6 months in patients who are at a relatively low recurrence rate. Senior author Axel Grothey from the Mayo Clinic Cancer Center (MN, USA) explained the potential application of the results: “Our findings could apply to about 400,000 colon cancer patients worldwide every year. For 60% of these patients, who have lower risk for cancer recurrence, 3 months of chemotherapy will likely become the new standard of care.”

A long-awaited drug approval also came in June when the European Commission approved dinutuximab beta for high risk neuroblastoma patients over the age of 12 months, making it the only approved immunotherapy in Europe for this group of patients. Dinutuximab beta can be utilized in children who have previously received induction chemotherapy and achieved at least a partial response, followed by myeloablative therapy and stem cell transplantation, as well as those with history of relapsed or refractory neuroblastoma, with or without residual disease.

In July, yet more advancements were made in the field of neuro-oncology; a multi-institutional group of researchers published the results of the largest ever study of brain cancer. The results uncovered 13 novel genetic errors associated with an increased risk of developing glioma, taking the total number of recognized errors up to 26. Of the 13 previously unknown genetic changes linked to glioma, one increased the risk of developing the disease by a third and the rest by at least 15% each.

A few months on and lung cancer led the headlines when NICE announced that nivolumab would be made available on the Cancer Drugs Fund for treating locally advanced or metastatic squamous and non-squamous non-small-cell lung cancers after prior chemotherapy. Paul Workman from the Institute of Cancer Research (London, UK) commented on the announcement: “It’s great news that people in the UK with non-small cell lung cancer will now gain more time with their loved ones after being granted access via the Cancer Drugs Fund to the pioneering immunotherapy nivolumab. I’m pleased to see NICE and the drug’s manufacturer showing flexibility in reaching agreement on the drug’s approval.”

Immunotherapy research again made a splash in the news when researchers at the Netherlands Cancer Institute (Amsterdam, Netherlands) demonstrated that PD-L1 binds to a protein known as CDMTM6, which stabilizes PD-L1 thus increasing the cancer cells ability to inhibit the immune response generated by T cells. The researchers hope that these findings bring research closer to understanding the mechanism utilized by cancer cells to evade the immune response and could allow treatments to be developed that are aimed at CMCTM6, creating a stronger immune response.

Blood samples could predict which cancer patients will respond to immunotherapy

Significant progress was made in November in the field of breast cancer; in a breakthrough-global study researchers unearthed 72 new genetic variants responsible for increasing the risk of breast cancer. The identified risk regions nearly doubled the total number of known variants associated with breast cancer, bringing the number to approximately 180. The researchers believe these differences may be sufficient to change practice, such as in how women at different risks are screened.

An international group of researchers discovered that even 20 years after a diagnosis, women ER-positive breast cancer still face a substantial risk of cancer recurrence or spread. They observed that breast-cancer recurrences occurred at a steady rate throughout the study period from 5–20 years and that the risk of distant recurrence strongly correlated with the patients original tumor diameter and nodal status (TN), with risks ranging from 10– 41%, depending on TN status and tumor grade.

As the year draws to a close immunotherapy advancements made the headlines again; a study demonstrated that there is a novel mechanism used by tumors leading to early T cell apoptosis, preventing effective immune attack. “Immunotherapy has been delivering some impressive results, but only for a fraction of patients,” Van den Eynde discussed. “Now the million dollar question is, what can we do to improve the proportion of patients that respond to these treatments? There are a variety of mechanisms of immune resistance that operate in the tumor. This is what we are addressing in our studies.”